What is a Flipped Classroom?

Flipped classroom is a 21st-century teaching and learning model, where the traditional method of teaching new content is flipped from the classroom space to the home learning space, thus freeing up the classroom face time for meaningful discussions.

Flipped classrooms move the LOTS ( Lower Order Thinking Skills) of remembering and understanding to the child’s individual learning space at home and the HOTS (Higher Order Thinking Skills) of applying, analysing, evaluating and creating to the collaborative classroom space at school. This results in quality time at home and school. The family connects at home over the learning module and the peers and teachers connect at school over meaningful debates and discussions. 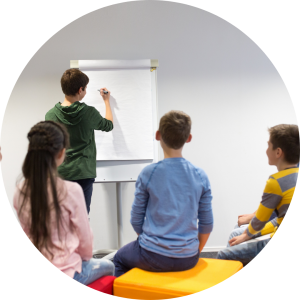 How does it work?

Teachers and Students
at School

The Delhi Sultanate was an Islamic empire based in Delhi that stretched over large parts of the Indian subcontinent.

Watch the video to grasp 320 years of The Sultanate.

Independence Day is celebrated to commemorate India’s freedom from the British rule in 1947.

Watch the video to grasp information about India’s Indipendence